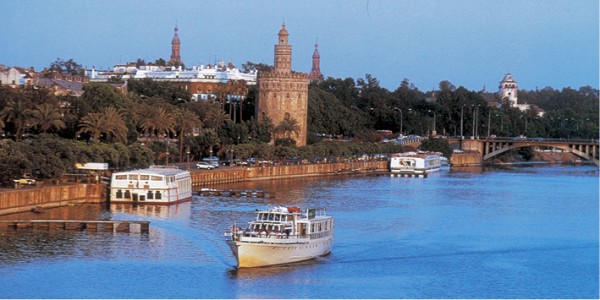 Early morning departure towards Sevilla. Stops en route. Arrival at the hotel in the afternoon. Free time, dinner and accommodation in Hotel Don Paco which is situated in the heart of Sevilla.   The hotel is less than 10 minutes away from everything you will want to see. https://www.hoteldonpaco.com/terraza-rialto/

Breakfast and panoramic visit of the city with official guide included. Depart the hotel at 9.30am.  We start the tour by bus passing some of the most emblematic monuments of the city such as the Maria Luisa park where the spectacular Plaza de España can be found. Continuing along the banks of the River Guadalquivir  we can admire the Torre del Or, the famous Plaza de Toros de la “Maestranza”, the church of La Macarena and finishing at Murillo gardens. Continuing on foot through the typical labyrinth streets of the old Jewish quarter and finishing in the area of the Cathedral (entrance not included). Free time or optional excursions either to Los Reales Alcazares or a boat trip on the River Gualquivir ( not included ). Dinner and accommodation in the hotel.

Breakfast and free day in Sevilla for a detailed visit of the city. Optional excursion to Jerez to Bodega Tio Pepe. (Entrance not included) .  We will leave the hotel at 9.30 am and plan the visit for 12:00.  After you will have time for lunch and to visit Jerexz before heading back to Seville.   Dinner and accommodation in the hotel.

By the early 19th century Jerez had become the wine capital of the world. In 1835, Manuel Mª González Angel put all of his savings into the founding of a small winery and within 20 years González Byass grew to become the leading exporter of sherry wines in Jerez.

The first bodegas (storage houses where sherry is aged and matured) were built at this time: La Constancia, Los Apóstoles and La Cuadrada. By mid-century, others followed, including La Concha designed by Gustav Eiffel and the Lepanto bodega.

By the time of his death in 1887, Manuel Mª González Angel had not only built up a flourishing business but also created a unique architectural legacy.

A visit to the González Byass TIO PEPE winery in Jerez will transport you back in time to Jerez in the 19th century, although a fine glass of Tío Pepe sherry will soon bring you back to the present…

Duration of the tour: One and a half hours, including wine tasting.  Cost €12 per person.

Breakfast and departure towards the Costa Blanca, passing en route Granada and Guadix stops on route. Arrival back in Calpe.