In attending many coin conventions in cities on the east and west coast of the United States, I had never been south of Chicago until one day I received a letter from a coin collecting doctor at Oklahoma University.. His little group of coin enthusiasts often read in our house magazine of my visits to the USA, could I not stop there sometime with a few coins and give them a pep talk? So, on my next visit I changed planes for Oklahoma and was met by the Head of Anatomy who, with his students, dissected bodies all day. He was a cricket enthusiast and studied the Sunday Times each week. His photographic memory could answer any questions on any cricket match in the UK since the time W.G. Grace. He was also a great talker.!

He was a mine of information on the history of Oklahoma, both city and state.
Remember the musical and the song ‘Oklahoma, OK’? The story in the show was a very accurate portrayal of the range war between the cowboy and the shepherd: one wanted barbed wire to keep the sheep in while the other wanted the cattle to range free .
Before the Act of Settlement of 1889 allowing settlers to displace the Indians, it was home to several Indian tribes, chiefly the Choctau, so it’s not surprising they fought for what they considered theirs. In the great Land Run of April 20th, 1889, 50,000 people in horse-drawn wagons with all their possessions rushed to stake their claims to two million acres of land.

Later that evening, like most Americans, he wanted to show me his guns which he kept in a locked cupboard under the stairs. His prized possession was a WW1 .303 rifle, still an accurate and powerful weapon.
Unfortunately, the bayonet, normally attached to the barrel was on a hook suspended under the stairway. As he stood up holding the rifle, the point of the bayonet pierced the top of his skull causing a veritable fountain of blood. He uttered the famous words ‘don’t panic, I’m a doctor’. I was told to press down hard on the wound and get him to the bathroom ASAP, leaving a considerable trail of blood. Suitably plastered and the worst of the blood mopped up he seemed more worried at what his wife would say when she got home the next morning.! This was just the start of an unforgettable visit to Oklahoma.

Did I know about the Cowboy Hall of Fame, he asked; I had never heard of it, so the next afternoon there we were on Persimmon Hill looking at a series of buildings that was intended to resemble a tented, encircled encampment with the campfire in the centre.
The galleries were dedicated to the history of the West, the cowboys and the art and crafts of the different Indian Tribes.

At the entrance of the first gallery, we entered I stood rooted to the spot, absolutely mesmerised by the paintings displayed. This was the gallery dedicated to the ‘Cowboy Painter’, Charles Marrion Russell. I had never seen anything so realistically representing life on the range. The animation and smell of the horses and riders, the hoof-beat of a thousand head of cattle, their dust filling eyes and mouth, was seen, heard and felt in these magnificent paintings. Not only paintings, but sculptures and miniatures in bronze, and numerous letters he had written to friends with exquisite pen and ink drawings at the head. This was my first introduction to the genius of Charlie Russell and I wanted to know more.

Charlie, born in St. Louis, Missouri in 1864 had always been good at drawing and sketching with a desire to move out west and at 16 he moved to Montana to his beloved West and never left. Described as a pioneer, an artist, a writer, an historian, he was happiest most on the back of a horse enjoying the freedom and friendship of his Indian friends. It was in the late 1890’s that his paintings first began to be noticed; now they are sought after and sell for millions. His ability to capture with intimate accuracy the real West that he first encountered are the hallmarks of his work; the round-ups, cattle drives, hunting trips with trappers, but most of all Indians and camp fires on the open range. He died in 1926. In a delightful epitaph by Will Rogers, another iconic cowboy figure, wrote that he wasn’t ”just another cowboy, just another artist, just another anything; he left us an example of how-to live-in friendship with all mankind”
Charlie Russell’s hand painted self-portrait Xmas card made for a friend bears a hand written message.–

Best wishes for your Christmas

Is all you get from me,
Cause I aint no Santa Claus–
Don’t own no Xmas tree.
But if wishes was health and money
I’d fill your buck- skin poke,
Your doctor would go hungry
An’ you never would be broke.

I try to make my articles interesting, informative and sometimes thought provoking. Any comments to petercalpe@gmail.com 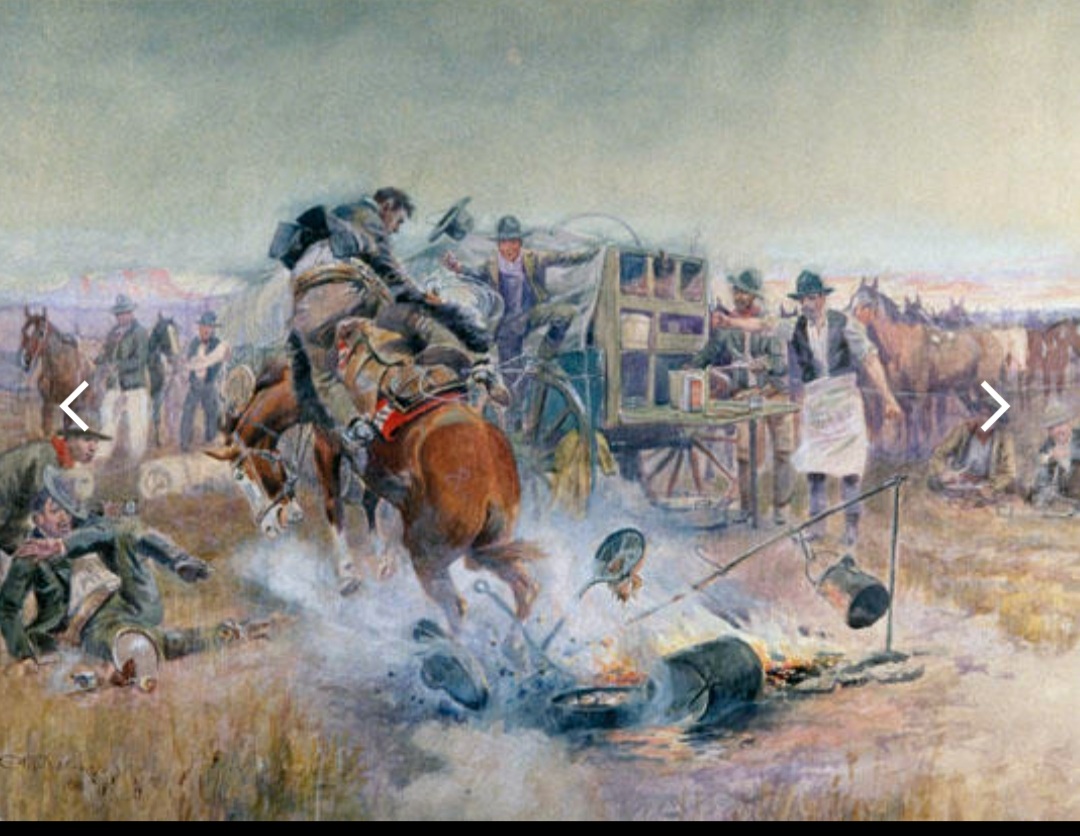 This picture Bronco for Breakfast is brilliant. The look of surprise on their faces, especially that of the chuck wagon cook whose breakfast for the boys was scattered by the bucking bronco ! 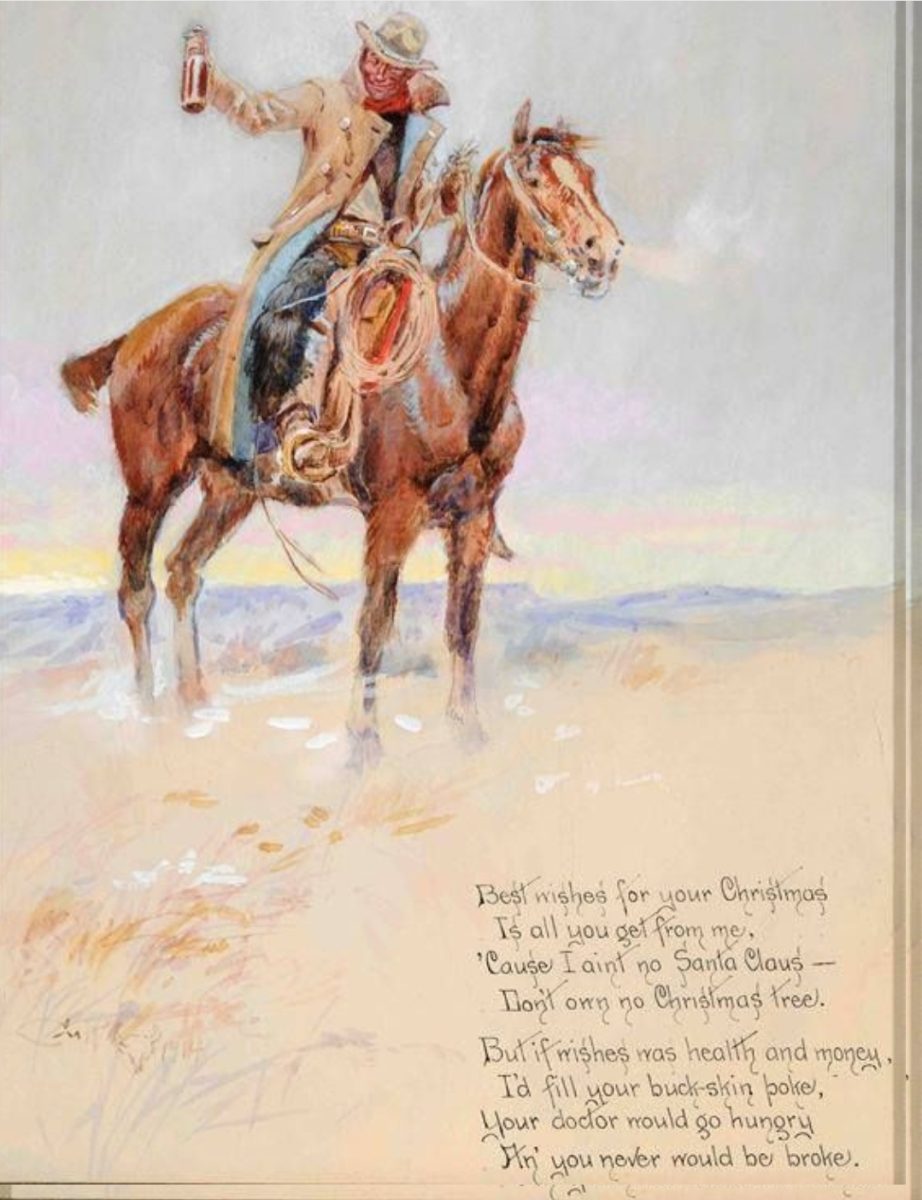 IS THIS THE GREATEST MEDICAL DISCOVERY OF ALL TIME ?